After studying dance at ArtEZ (Arnhem, the Netherlands) Heike Langsdorf performed as a dancer in productions by Belgian choreographers such as Alexander Baervoets, Thierry Smits and Jan Fabre. This was how the German ended up in Brussels, where she still lives today. She also began developing her own work in Belgium. She started thinking about forms of cooperation based on her experience as a dancer with various dance companies. Are there alternatives to the hierarchical model in which a choreographer steers the dancers and artistic employees with a fully-fledged idea in mind? This became a burning question for Langsdorf, which she explored in various collectives that she (jointly) founded. From 2011 to 2012, she formed C&H (a combination of their first name initials) along with the artist Christophe Meierhans (CH) and scenographer Christoph Ragg (DE). The trio was also the driving force behind f,r,o,g,s Open Source (2002- 2008): a communal network of artists that made interdisciplinary cooperation the subject of their research and practice. Since 2010, Langsdorf has worked under the name of radical_hope (originally the title of her research project at a.pass, advanced performance and scenography studies).

She strives not to impose an aesthetic language on her artistic co-workers nor on the audience, or the context in which she works. Also in this sense, she operates horizontally: adopting an approach based on interaction and dialogue.

It is not always easy for a dance lover to follow Langsdorf through her variable collaborations in varying structures. Nevertheless she draws clear artistic lines and interests throughout her journey. She strives not to impose an aesthetic language on her artistic co-workers nor on the audience, or the context in which she works. Also in this sense, she operates horizontally: adopting an approach based on interaction and dialogue.

A prime example of how she shapes this interaction with the environment is provided by the Postcards From The Future project (2007-2012 performed in diverse European cities by C&H). Situations were staged and subsequently photographed at different locations in the urban space. The photographs were circulated throughout the city as postcards. The rear of the postcard stipulated a moment in the future when the scene could be observed once more at the location in question, when it would be staged a second time. The postcard of the Brussels North Station not only features travellers but also homeless people and youngsters that often hang out there. Thus the activity performed by C&H does not hijack the location, but uses its identity as the foundation and adds something to it through a subtle interaction from an artistic perspective. 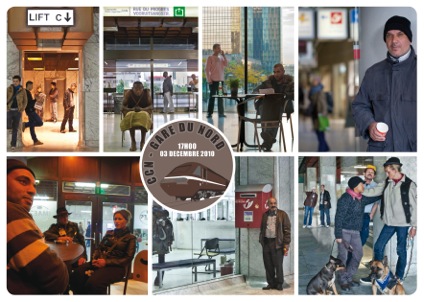 You might be wondering what this has to do with dance? Watch the video clip Postcards From The Future, Vlaamsesteenweg.

You see how the artist Christoph Ragg uses a list and instructions he gives via a walkie-talkie to get cars to leave a garage in a particular order. The cars are all heading to the Vlaamsesteenweg in the centre of Brussels. They assemble there to form an orchestrated traffic jam. Cars loudly beep their horns, passers-by look curiously on: the chaos is complete. That which is usually in motion comes to a halt. Consequently this creates a new mood. People talk to each other and all kinds of exchanges and negotiations take place: French fries are offered in exchange for wine, drivers play their music to create a party or offer their services as a fortune teller, someone sells magazines, and so on. How are bodies (or objects such as cars) positioned or allowed to move in the space? How do you compile images (such as chaos)? How do you organise and structure time and space? Many choreographers use these fundamental questions as starting points, as do Langsdorf and her colleagues here; the difference is that they don't do so in an isolated dance studio but in dialogue with everyday life. As a result an inevitable political resonance also slips into the work in a fairly light-hearted manner. Do we race around in a society in which everything must go 'forward' and not simply pass by? What changes if we 'stand still'? How much chaos can we tolerate? Can chaos also be productive? The project also challenges us to reflect on these types of questions.

This takes place - once again - in a non-obligatory manner. Langsdorf does not explicitly spell things out: her invitation to the spectator is always discreet. An unobservant soul may not even notice it. This applies to Postcards From The Future as well as Sitting with the Body 24/7 (2014), from which the following clips originate.

The attentive concentration with which the people calmly perform the exercises, contrasts sharply, in terms of energy, with the life rushing by on the other side of the thin glass wall.

For this performance a small group of artists retreated to a retail space in the centre of Brussels for a week. All day long they jointly developed physical practices from everyday movements such as sitting, standing and walking, which are linked to meditation and breathing exercises, and which anyone (every-body) can perform. The subtitle of this project could have been 'An exercise in slowing down'. The attentive concentration with which the people calmly perform the exercises, contrasts sharply, in terms of energy, with the life rushing by on the other side of the thin glass wall. Yet not everyone notices: some people simply walk past, unaware. Others slow their pace or become intrigued and stand and watch from outside for a moment or seek additional information on the poster or from fellow passers-by. If they want they can also go inside to watch or join in (once or multiple times) performing the physical exercises. Whatever you do: as a spectator you jointly determine the work, which is halfway between a happening, an installation and choreography.

Moreover Langsdorf not only ventures out into the public space with these strategies of discretion, interaction and integration. In InCompany Workers’ Club (2016, Beursschouwburg) the spectator instantly feels at home on the theatre's stage, where seats, appetisers and drinks stand invitingly. The makers (Heike Langsdorf, Nicolas Galeazzi and Einat Tuchman) lead you through various joint exercises that all play on and conjure up images of our work situations.

Julie Rodeyns is an art critic (including for <H>ART magazine, Bozar The International Selection) and an arts mediator. She is the founder of Matchbox, provides training courses and consultancy in art mediation and is a visiting professor of 'Active Art Education' at University College Odisee (Brussels).